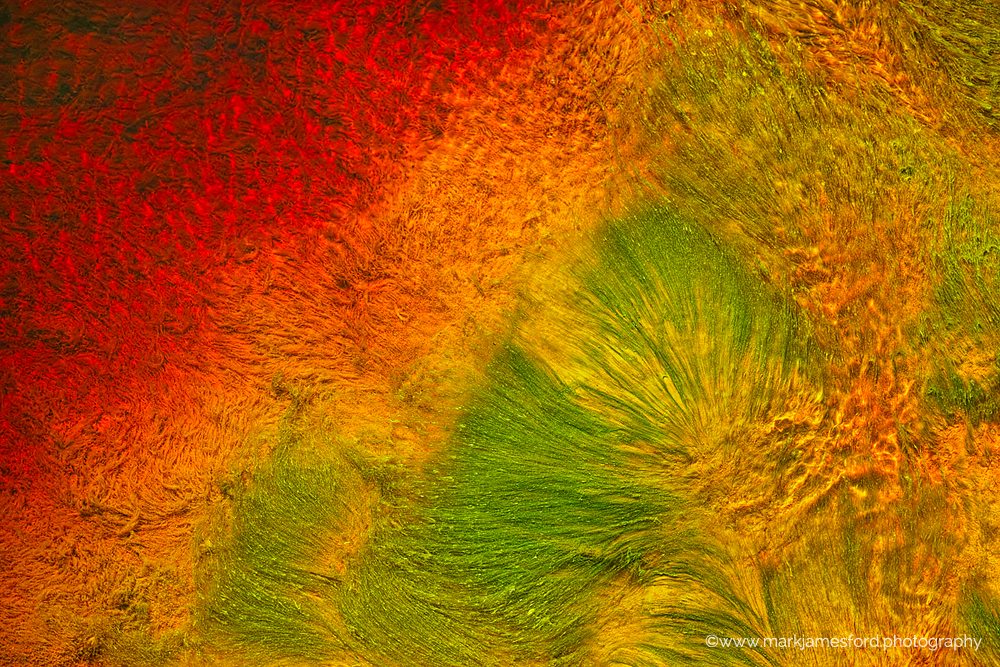 The Rio Tinto, Andalusia is a very special location and myself and Ines had the pleasure of spending a few days there at the end of August (2016). Whilst it would have been convenient to fly to Seville, actually Malaga represents a much cheaper option for an extended long weekend. Nevertheless, Seville was on the way, and, since Seville is one of my favourite Spanish cities, we spent an afternoon and evening exploring the old part of the city before going on the next morning to the Rio Tinto. On this particular occasion however the cameras stayed firmly in the camera bags as we enjoyed the atmosphere of the small winding alleyways and streets between the restaurants and bars. There would be enough time with the cameras over the next few days! 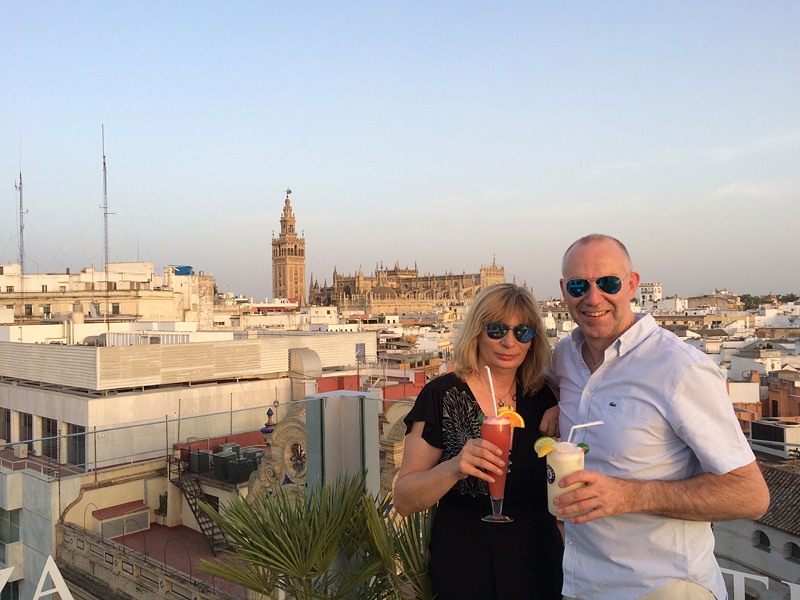 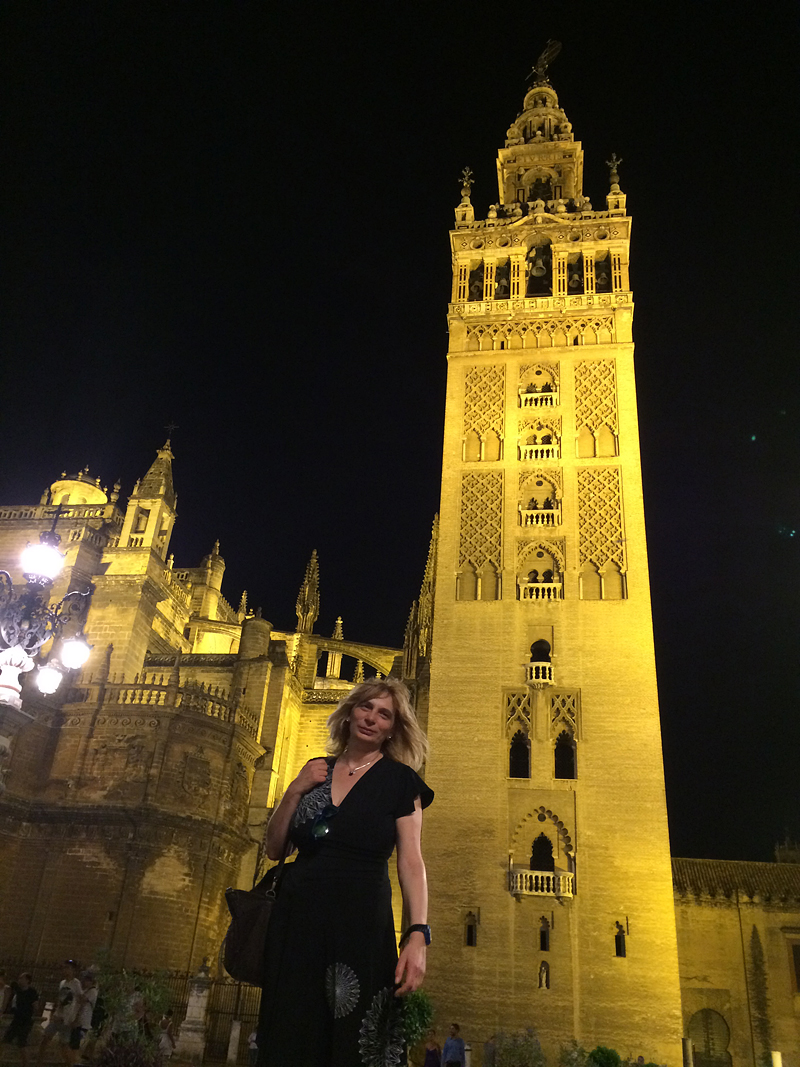 So ‘Why the Rio Tinto?’ The water in the river derives originally from the waste from the old iron ore mine workings – Minas De Rio Tinto. Primarily based on sulphide ores, the sulphides in the mountains of waste are slowly oxidised by microorganisms to sulphuric acid releasing the metal irons present in the ore at the same time. Due to this rather unusual source, the river has in places a pH of 1.7-2.5 and as well as a lot of iron (hence the colour) contains cobalt, manganese and cadmium. No plants, no fish, no amphibians and insects die pretty soon after contact. The only only organic structures in the water are fragile plant like strands (which disintegrate on touch) made by the microorganisms that are able to survive in these very extreme conditions. In fact, the conditions have been researched by NASA as this is believed to resemble how life potentially might have been / might be on Mars. Clearly, this is not water that one readily goes walking in barefoot and this is never more obvious than close to where the water emerges like blood from the wounded ground. 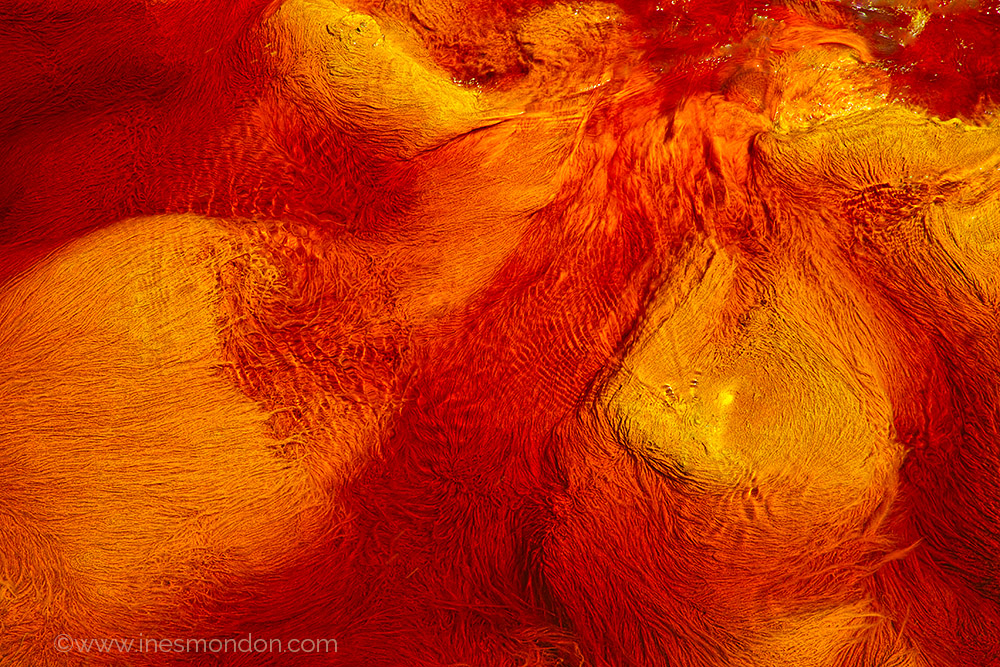 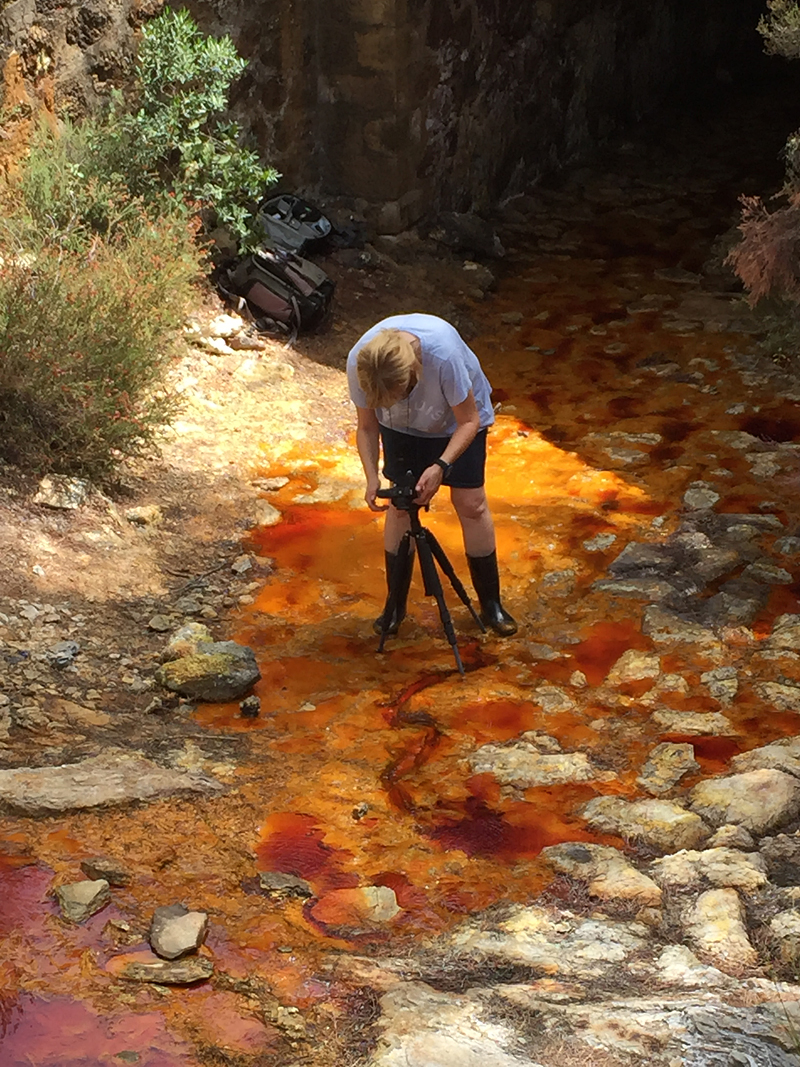 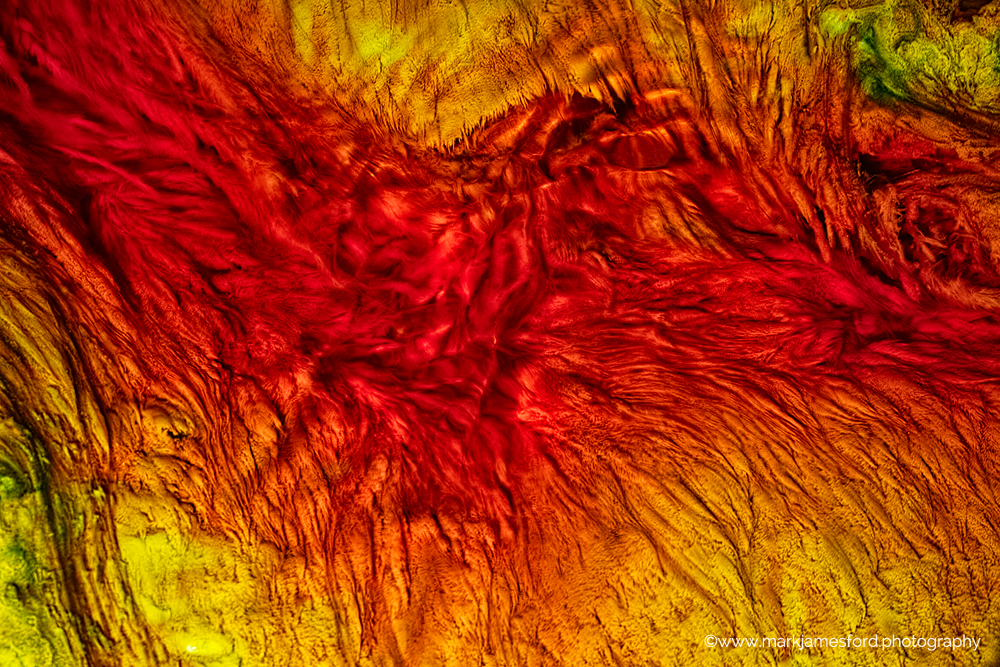 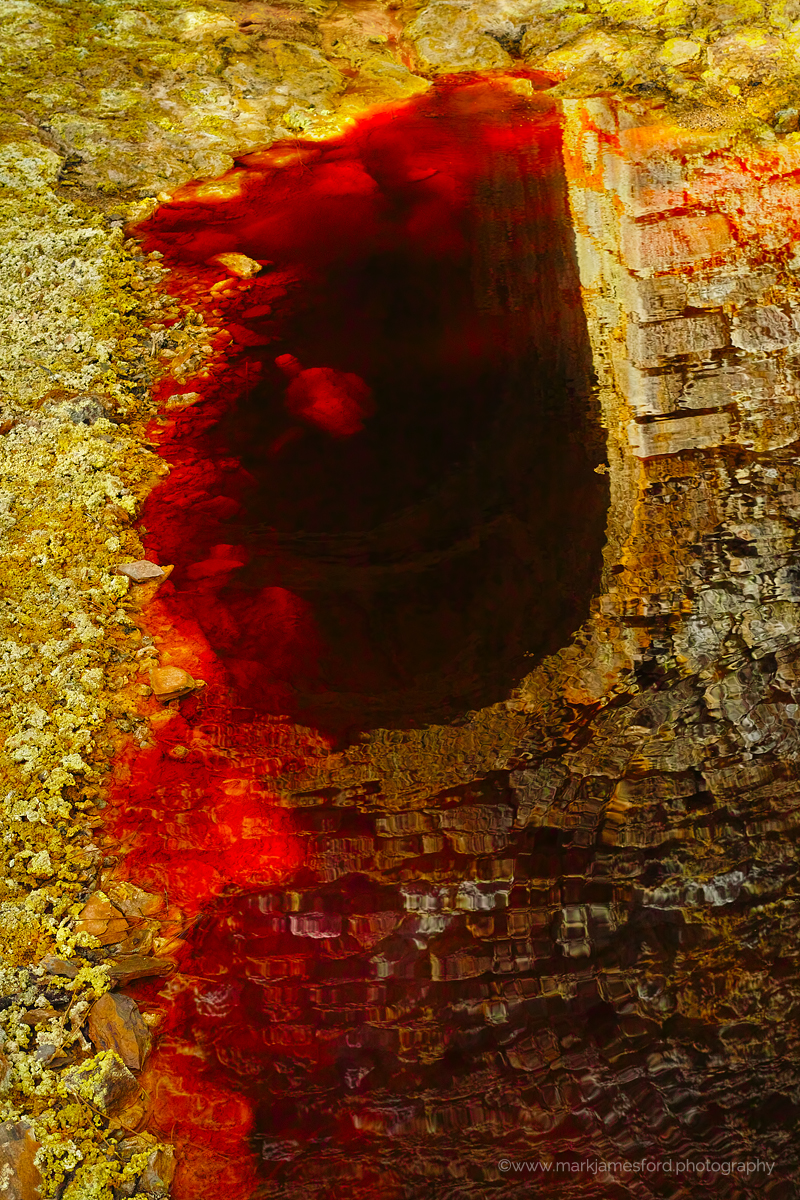 The landscape is in general quite surreal in places and the baking summer heat makes the idea that this was once a thriving industrial area no less surreal. Further down stream the water appears at first glance to be more normal, and, at nearly 40°C air temperature invitingly refreshing, nevertheless the dead insects, the colour of the water, as well as the sulphurous crystalline growths along its edge portray the fact that this river is anything other than ordinary. And this is why we were here: Fascinating for me as a chemist, the resulting reds, yellows, oranges and greens which glow intensely in the Spanish sun are a dream for a photographer … 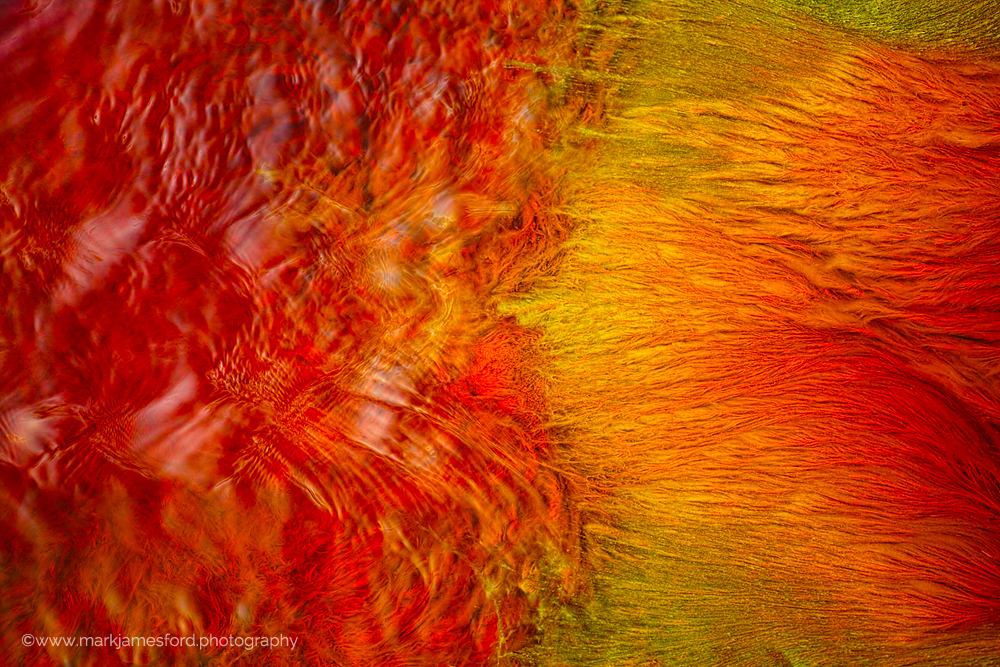 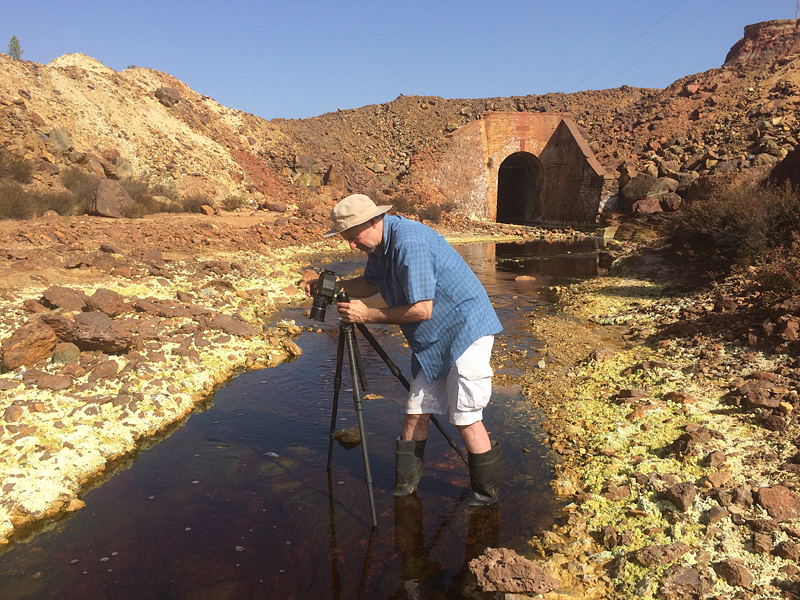 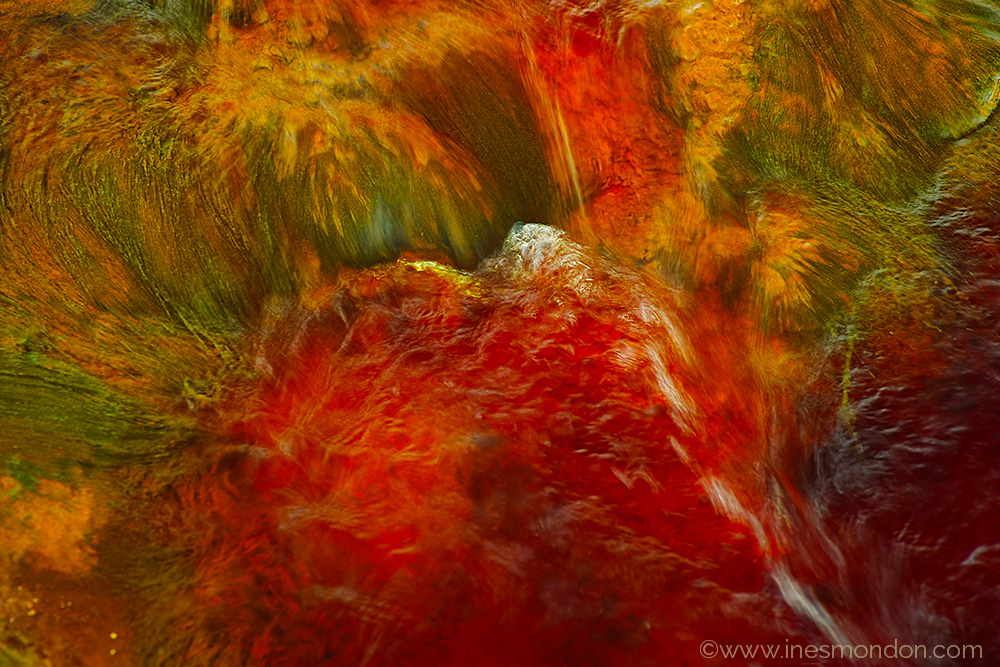 Of course, despite the overbearing temperatures wellies or equivalent are a must. While this is anything other than comfortable, the inability to wash the colour out of our clothing caused by inevitable small amounts of water splashes was ample warning that you did not want to get this on your skin. In general, there are many points on the the river which are ‘readily accessible’ without having to walk to far from the car (as long as the car can be driven along gravel tracks). However, on many occasions one needs to climb down a gravel slope which is often quite loose (simply uncompacted mine waste) and on occasion sharp, so that here too solid footwear is also a must. In the end however, we were amply rewarded for our efforts. Although we approach the subject in different ways, water is for us both an ever changing source of colour and detail and is thus very much a preferred motif. 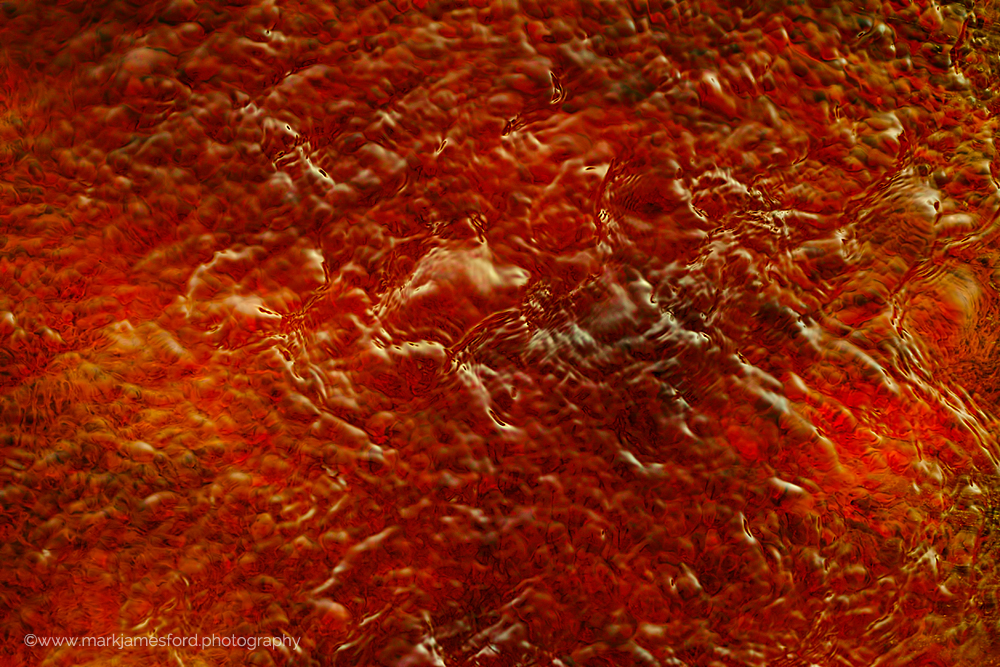 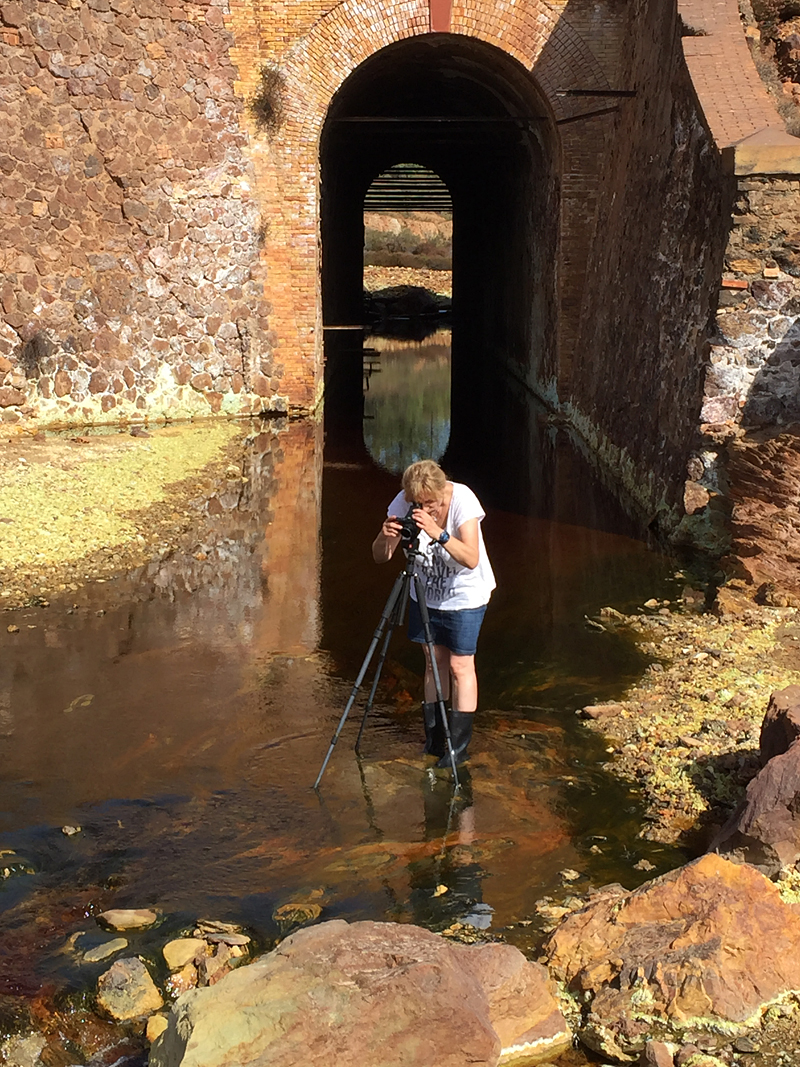 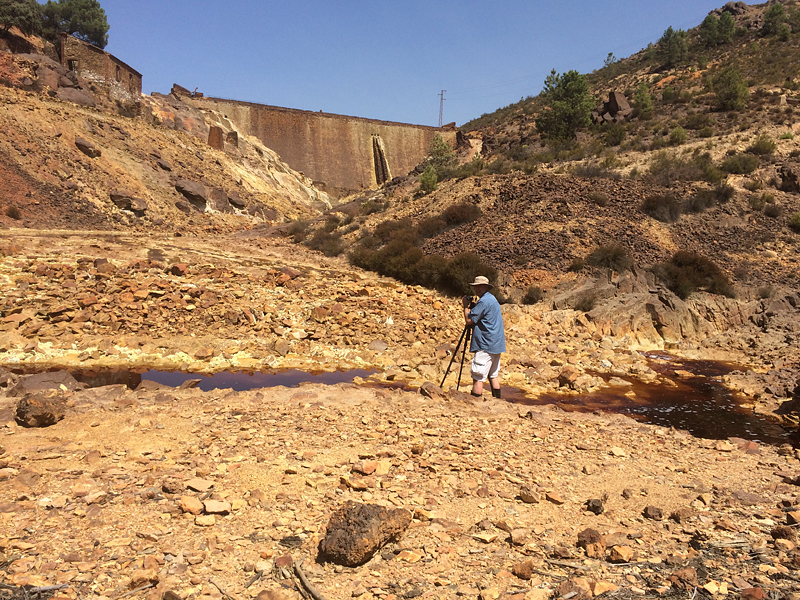 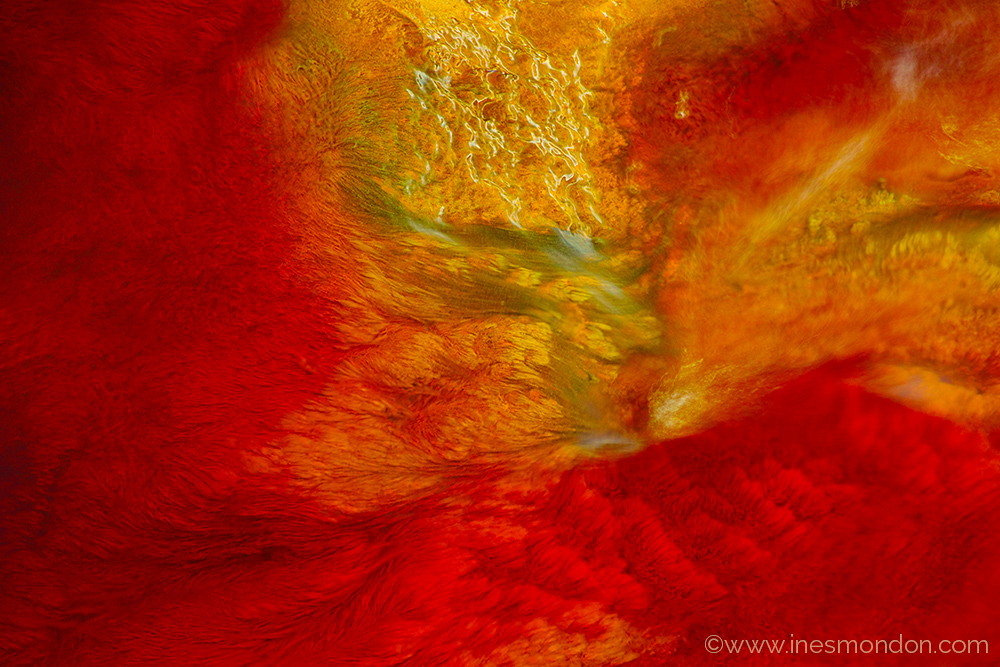 Mark was keen to explore the actual colour and detail within the water itself experimenting with visualising either surface structures or structures and details below the surface or a mixture of both. Ines of on the other hand, extends this concept even further, often exploring the relationship between the structures within the water and its surroundings. The conditions were at the limit for a digital camera (in a black camera housing) and on several occasions one or other of our cameras gave an ‘overheating’ warning and had to be placed in the shade of a none too cool camera bag. Unusually, for our photography, because the colours in the water are at their most intense when the sun is directly shining on it, we wanted to photograph on or around the middle of the day so that in general about two hours in the sun with no available shade was the limit for us anyway – despite ample water and heavy sunscreen! 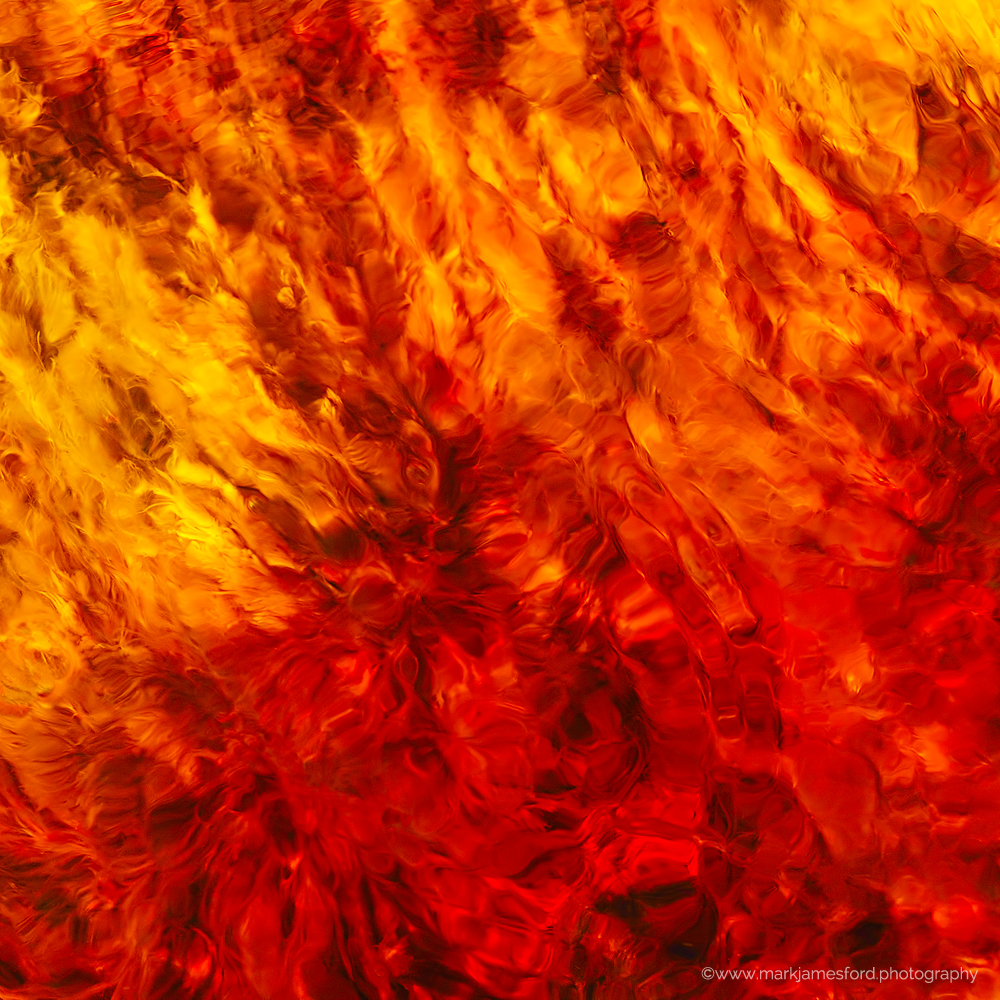 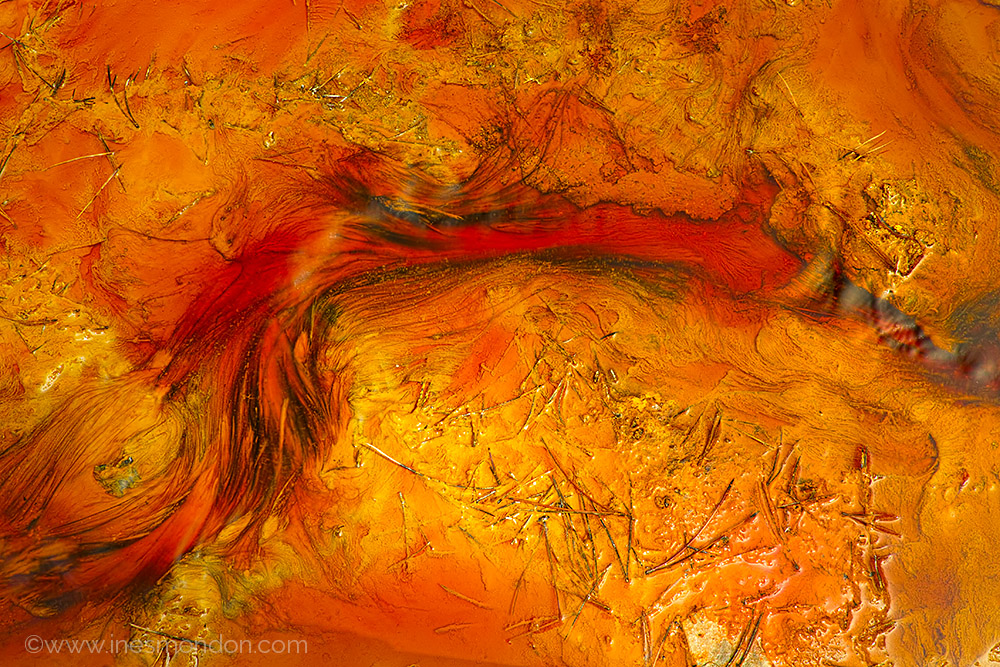 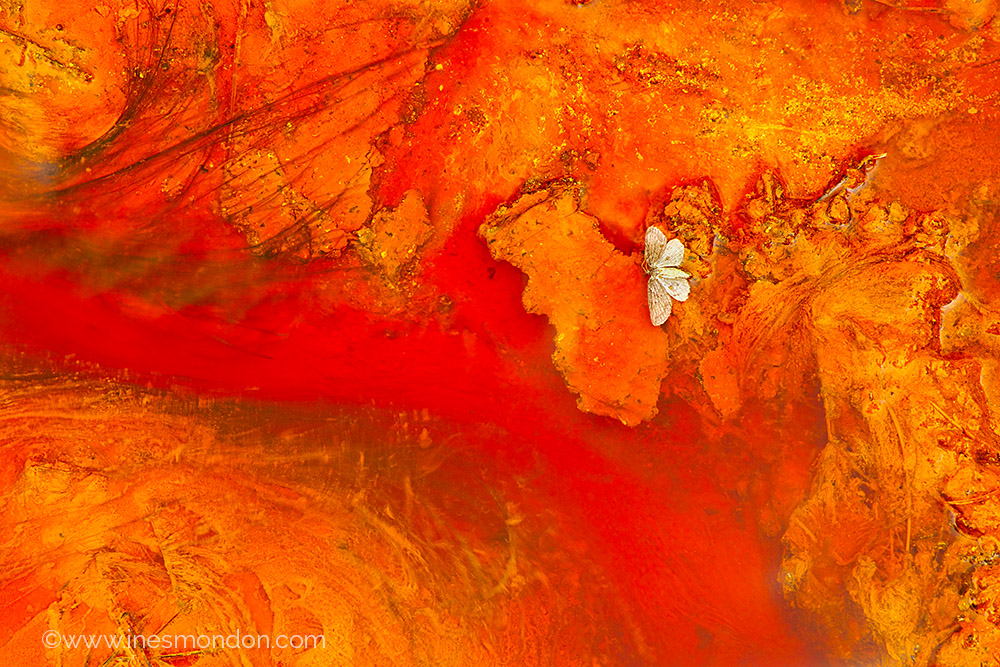 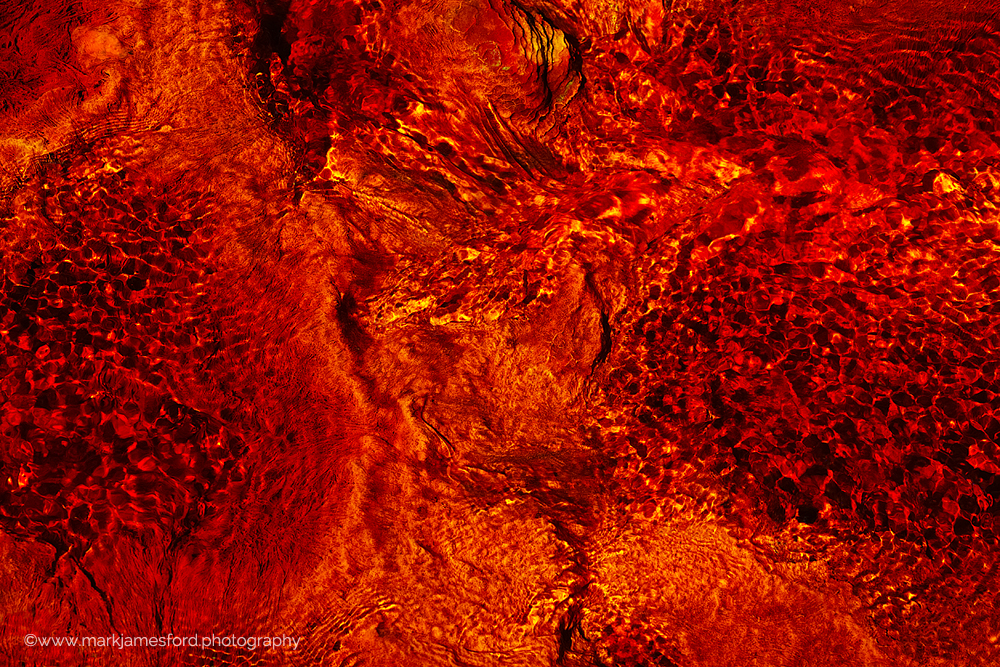 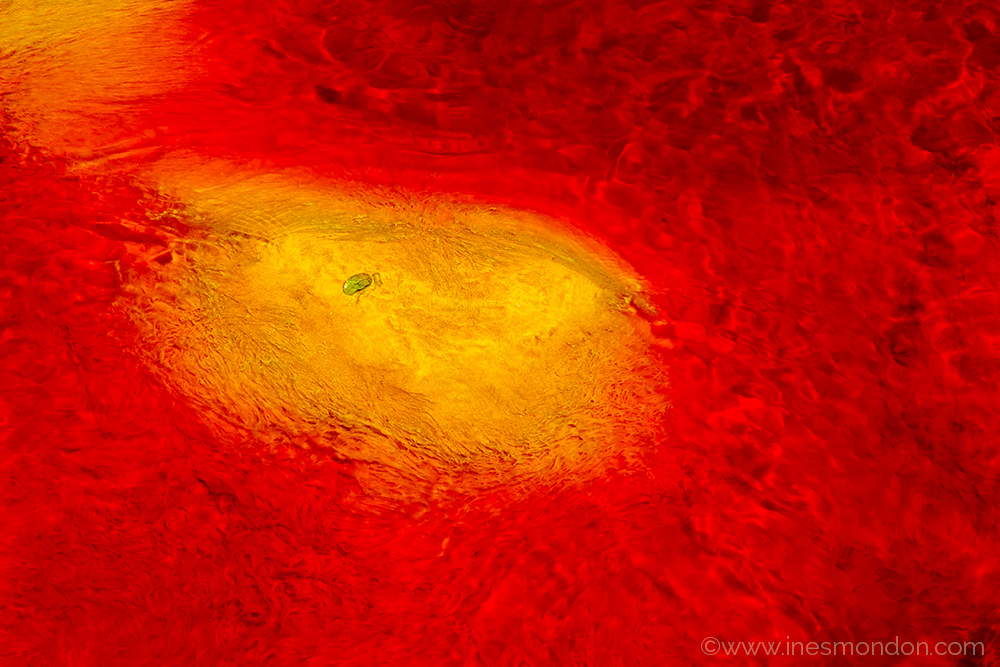 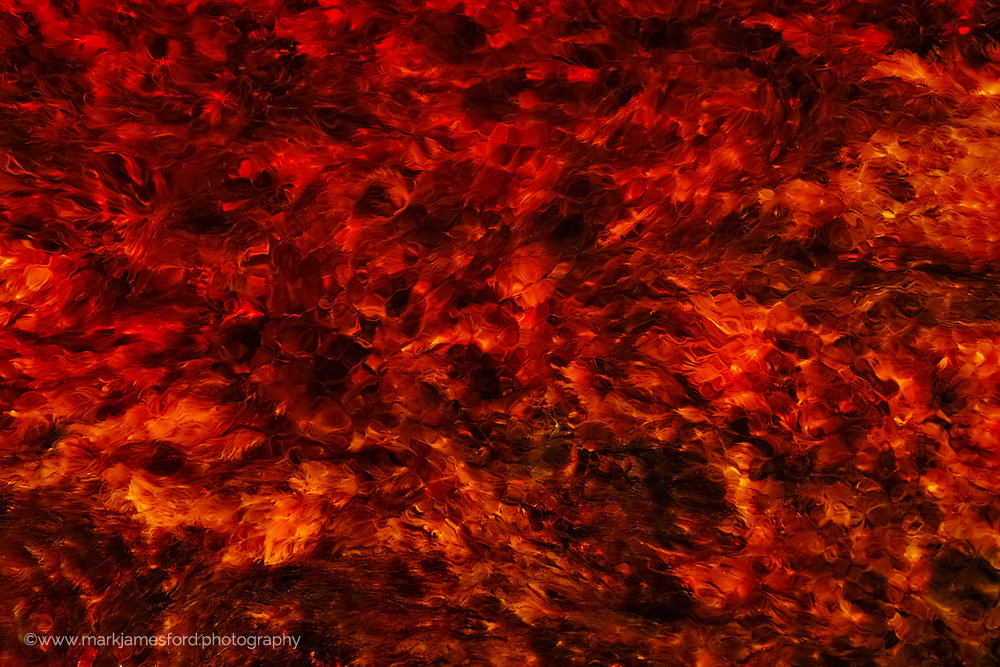 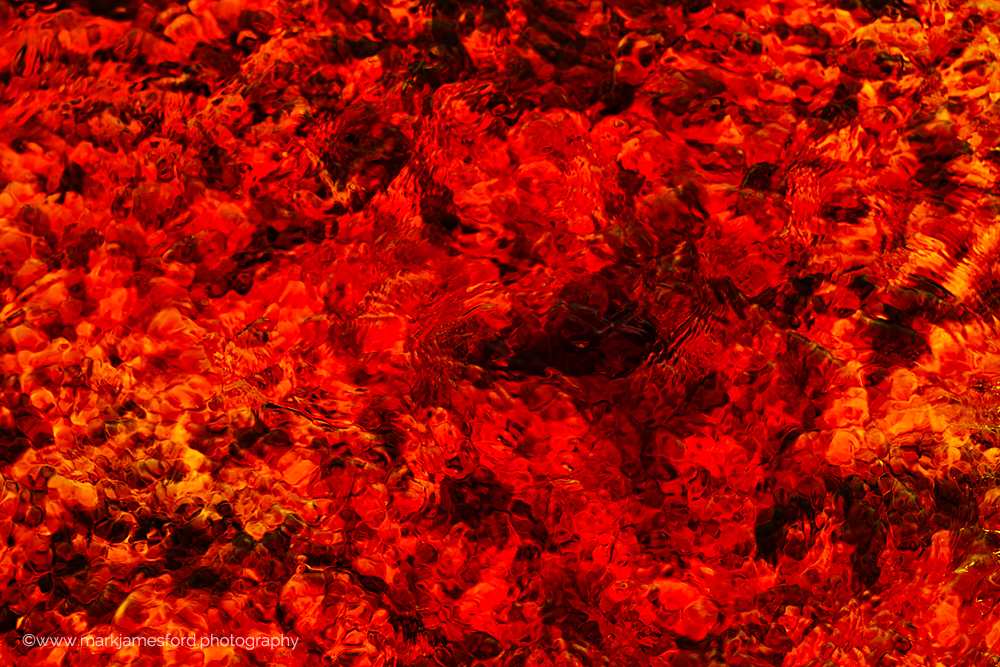 On the last morning we explored a different location: Embalse de Gossán. Near Minas de Tinto, this lake is separated and very different from a second smaller water body Embalse del Aqua by a road bridge. Embalse del Agua is what you would expect: Clean water, blue/green in colour depending on the incident light. Embalse de Gossán is very different, the water is orange magenta in colour and is clearly filled with water from the mine workings. The edges of the lake have yellow / orange crystalline deposits and the remnants of old tree stumps are covered in a crystalline growth which at first glance from a distance appears to be fur. Only on closer inspection is it clear that the covering is inorganic in nature and thus the water is very definitely something ‘different’! An opportunity then to explore some alternative motifs. 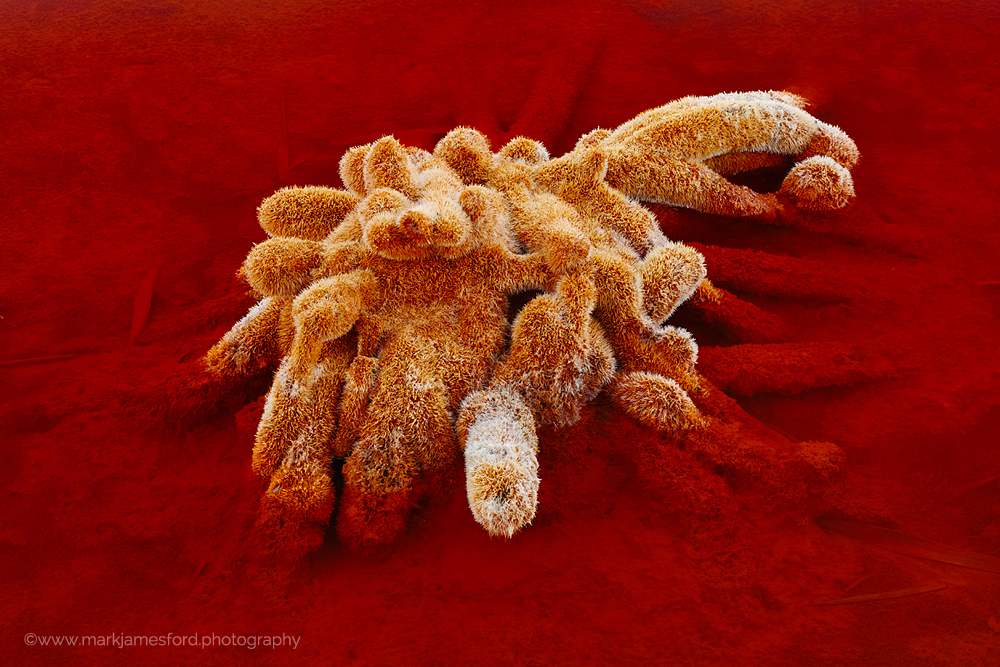 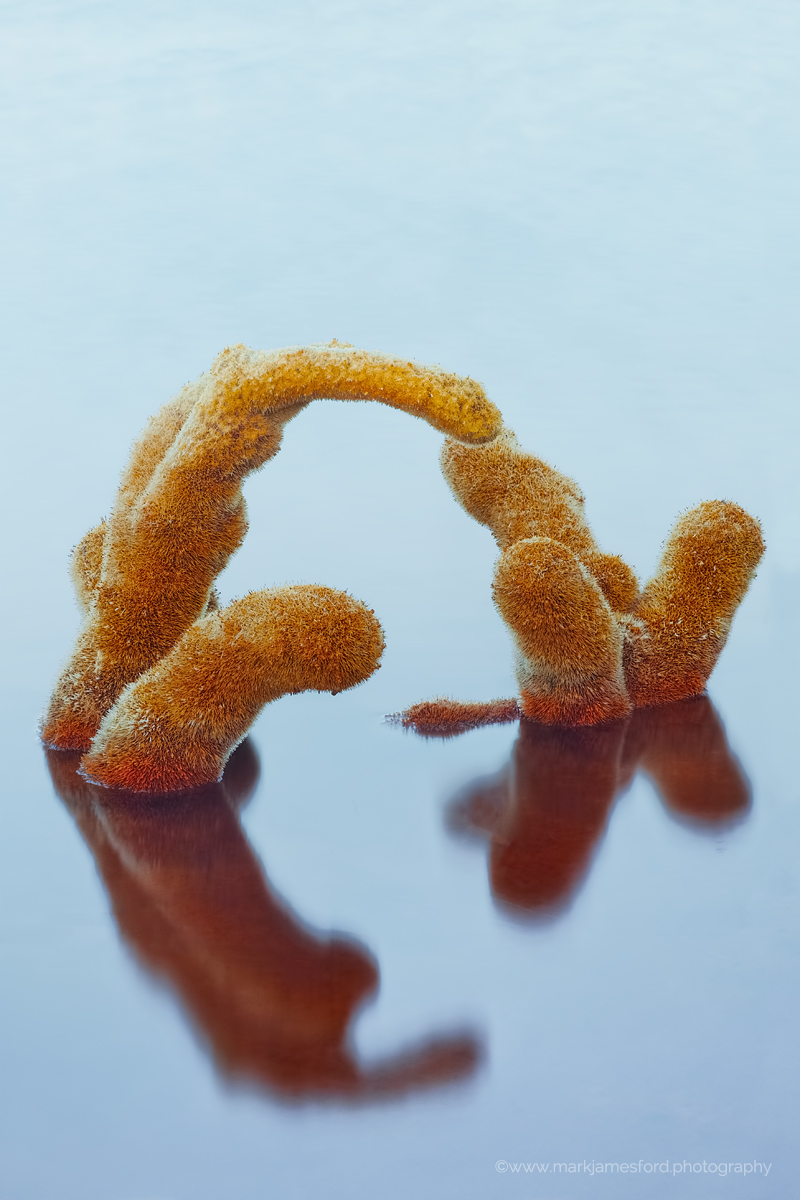 Of course it was not all sun, sweat and poisonous water … and on the final afternoon we had the opportunity to visit some friends on the coast, dip our toes in some decidedly fresher water and enjoy the seafood late into the evening as only one can in Andalusia. 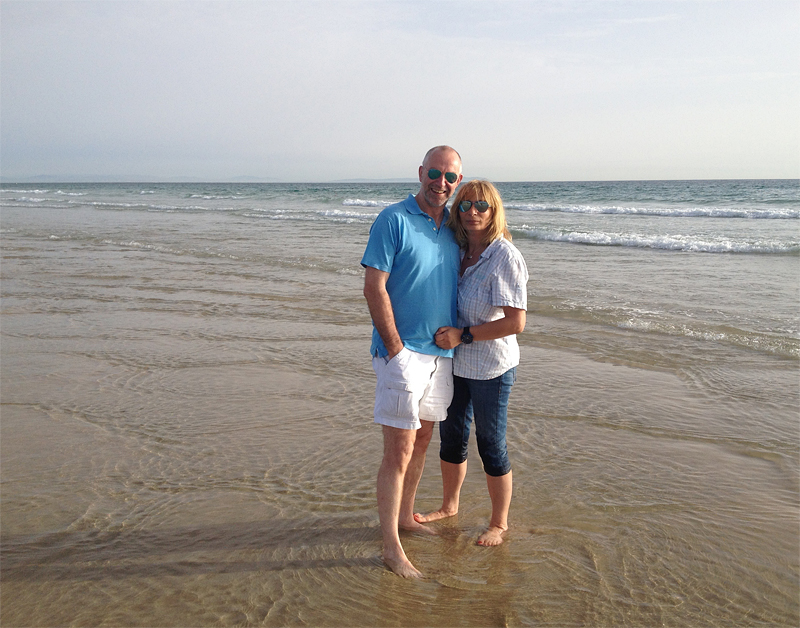 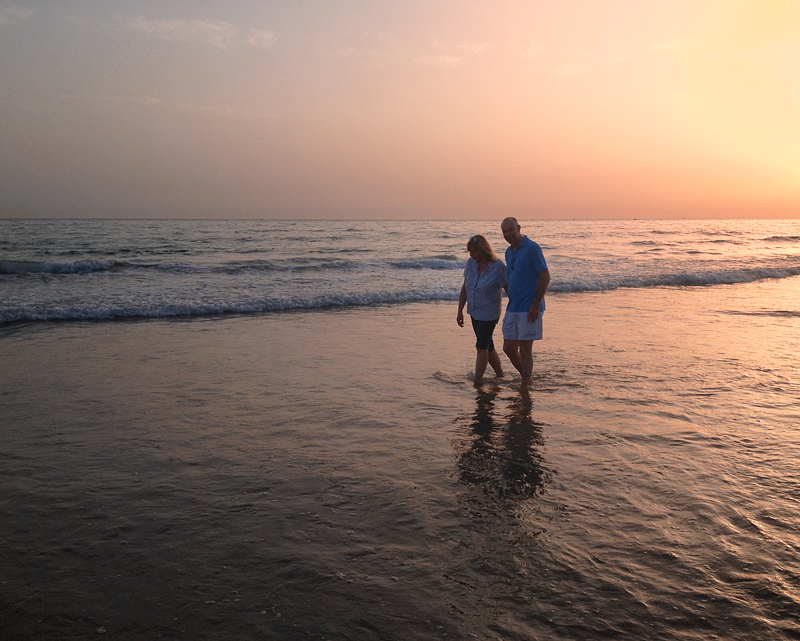