Astro-Photography with the SIGMA fp (2)

6 Months into my astrophotography journey – I thought it would be good to take stock of lessons learned and the “state-of-play”. It’s been a great journey so far, with results with which I am really pleased. So, as I bring this first chapter to a close – I would like to detail some of the many aspects involved. Please see the article here for the “Start Of The Journey … 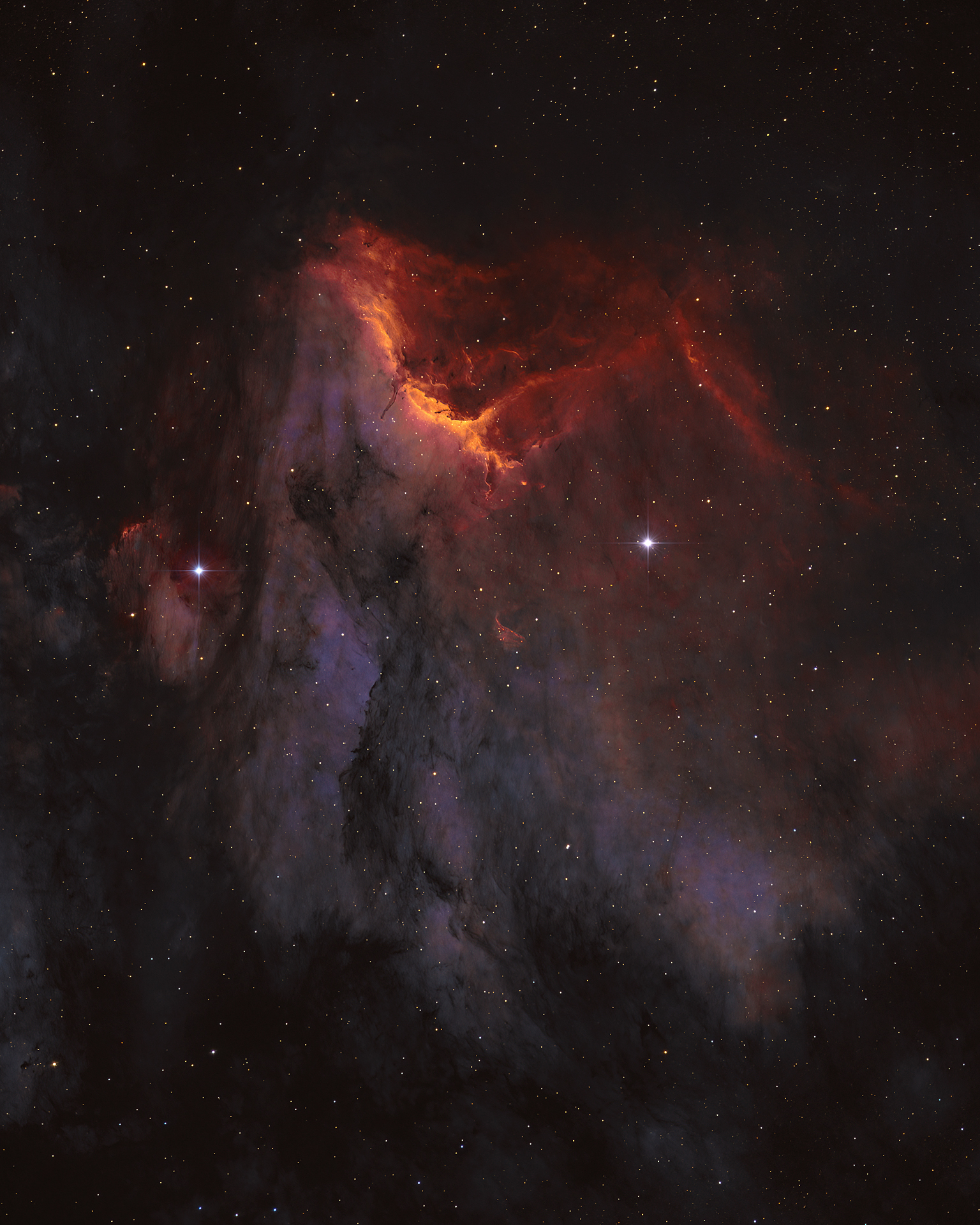 
Clicking on an image of a nebula will open a larger version in the Prodibi Viewer. Having been encoded for maximum quality, there may be a slight delay to the image loading.
Copyright: As with all images on this website, none of the images in this article may be copied or reproduced in any form whatsoever.


Locations: I made a very conscious decision at the beginning that I would always travel, every single full moon to ensure that I would have (as far that it is possible) somewhere in northwest Europe a clear sky when there would be a new moon. Ideally, this would also be in a “dark-sky” or at least considerably darker sky than where I live in Germany. I have used to Apps to guide me here “Windy” and “Light Pollution Map”. Windy is a phenomenal and, in my experience, an extremely accurate weather app, which allows me to track the development of weather systems across the whole of Europe. The light pollution map allows me to pinpoint locations which then have the darker skies. The combination has meant that I have always been able to find a location, though naturally the weather has meant that this is not always under the darkest sky. The final help comes from “Street View” within Google Earth. I am still amazed (as a pre-internet child) that I can accurately scout a location somewhere in the mountains in northwest Italy or northern Spain (so far 1800 km from where I live has been the remotest location) and identify, in advance, the exact spot where I should be able to set up my telescope and then to be able to drive to exactly this spot. Of course, it is not always so easy, and the vagaries of an unstable weather system have meant that plans have needed to change at short notice and sometimes, what seems like a good location can hold hidden challenges – The rice fields in the province of Vercelli, Italy in May seemed like an excellent “fall-back” location, not particularly dark but a good expansive view. However, the dark clouds rising from the waters at sunset and the accompanying audible hum, declared the error in this thinking – I have never seen so many mosquitos – I don’t know whether it is possible overdose on Autan, the anti-bite spray that by pure chance I had buried in the boot of the car. If you can, I did! It worked, I didn’t get bitten once, but I never expected that perhaps I would have problems shouting an object because of the mass of insects that could be in front of the glass. 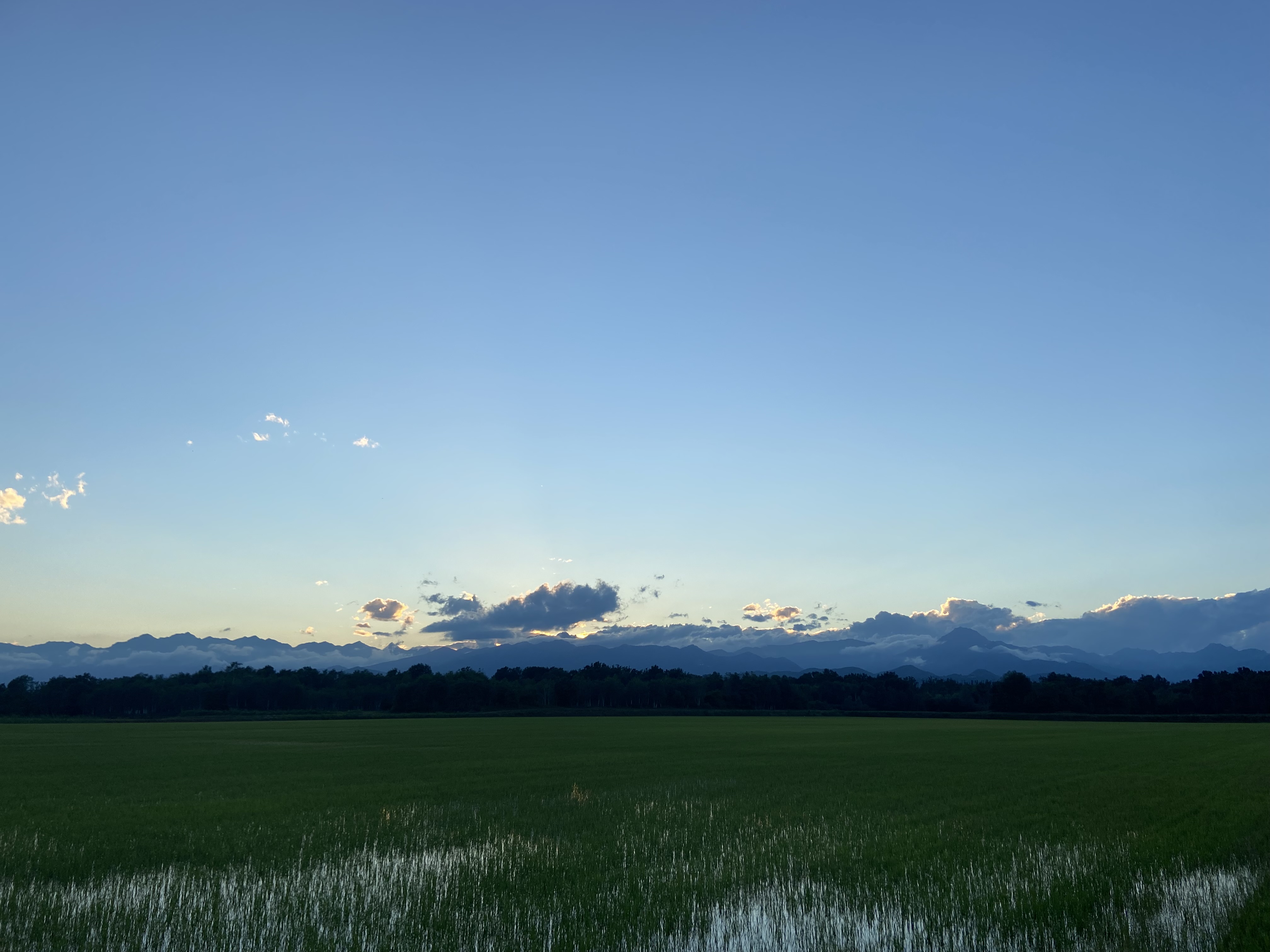 Rice fields in the province of Vercelli, Italy


Other challenges, in the fields in middle of France in April for example, have included “Steven-King-like” episodes of fog: Here, half-seen “Wraiths” rising from the ground gave warning of the impending end to the photography. A look behind and the approaching wall of fog appears. At such times one thinks of the classic horror movies where some minor character (who you know some 10 minutes later into the film will die horribly) says something like “Don’t worry, it’s just a bit of fog …”, and then, the contrast begins to disappear from each subsequent exposure and you begin wiping the water off the computer screen, and you begin listening very intensively to every noise … Such events are however soon forgotten, as one stands in some remote range of hills and the beauty of the night sky appears, like an old friend, in all its majesty, out of the evening sky above and around you – and I am simply at awe 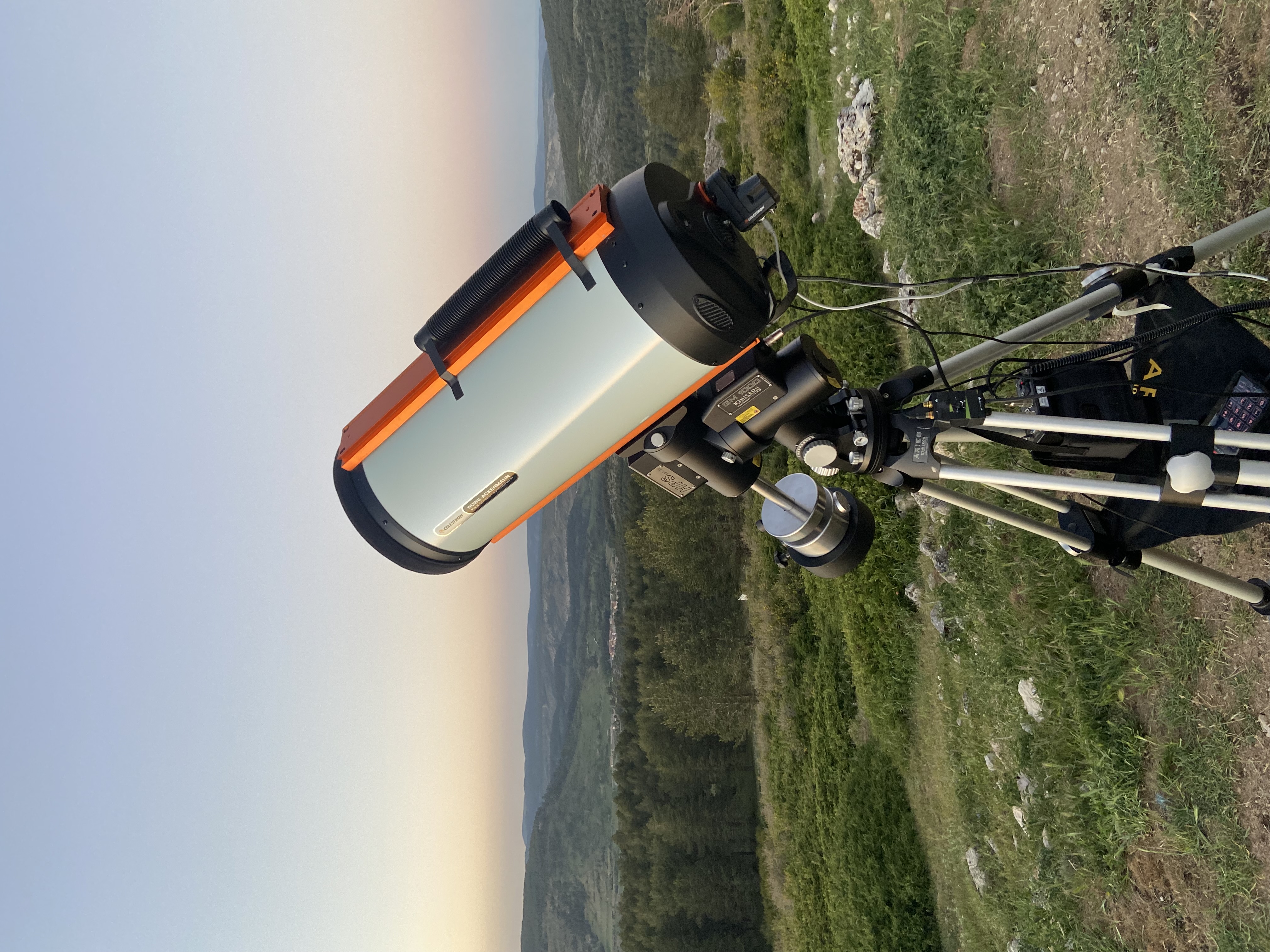 
Working with the telescope: The downside of working “on-the road” is that every single night the telescope and camera must be set-up from scratch and in the pre-dawn light dismantled again. Although both are now well-orchestrated events, it does mean that the first 60-90 minutes following the appearance of Polaris (first alignment check) are required to build the model for the sky that the tracker requires. With the long nights of February and March, this was not so noticeable, but when the astronomical night only last 4 hours (or less) in total then this adds a significant pressure to get everything right first time. Another reason to ”head south” in May and June, is that going from 50° to 40° latitude brings a good 60 or so minutes more “night”. The tracker model is (has to be) extremely accurate and even though the tripod is set up on kitchen tiles to spread the weight, on occasion the ground has proved to be less stable than anticipated with the very slight movements due to weight (ca. 50+ kg in total) being enough to ruin a night’s photography … 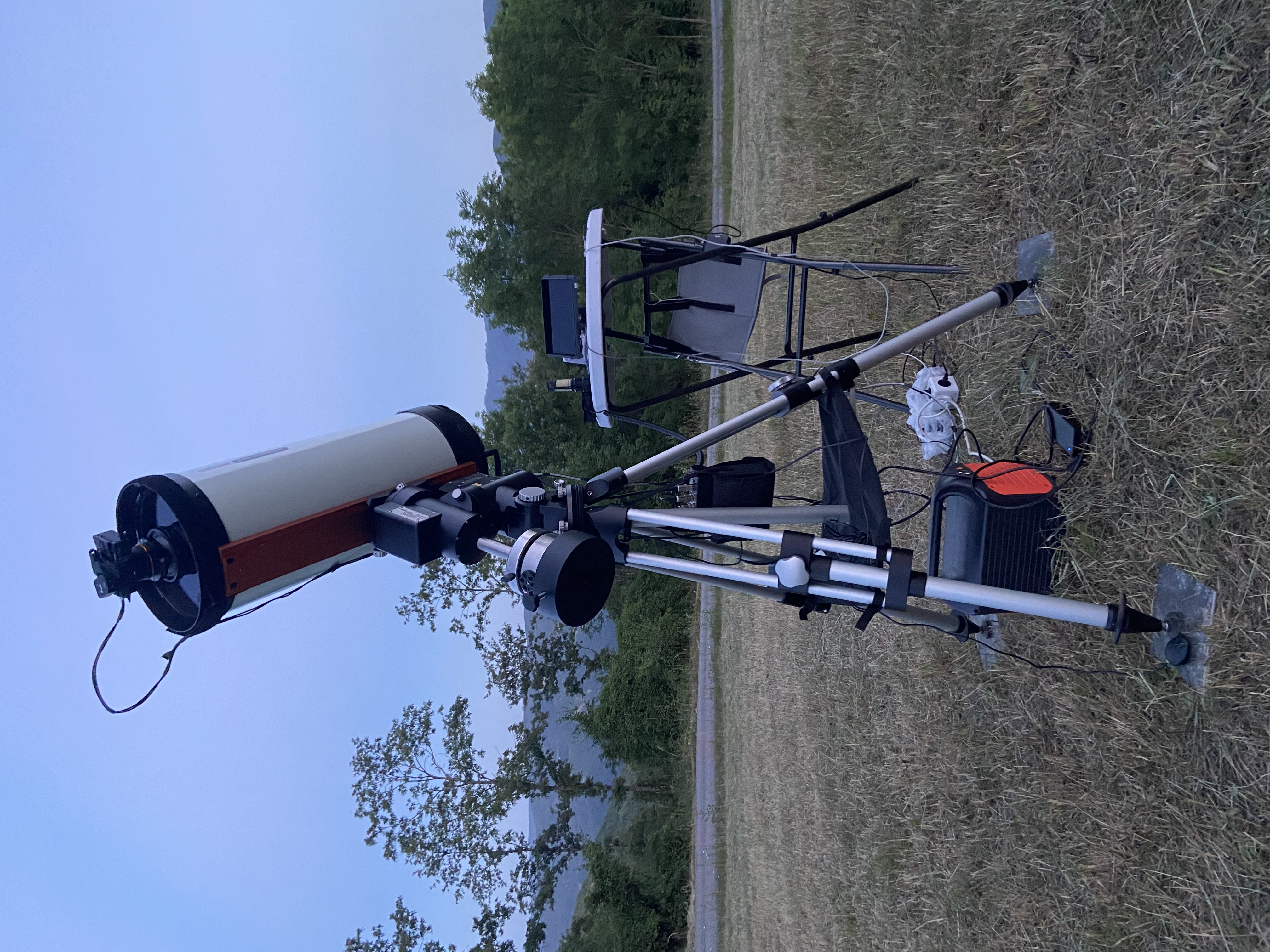 In the mountains north of La Spezia, Italy – Unfortunately, not as stable as I had hoped …


However, the most difficult task by far has been to focus the scope and I have progressed through many ways to achieve this. I really did not anticipate, although I knew in advance that a F2.2 Scope, such as the Celestron RASA 11”, is difficult to focus, indeed just how much work this would be. With over 40.000 single steps available to the focus motor (way more than could be achieved by hand), I did not anticipate that I would be able to see the difference in the fine structure of a nebula (when viewing conditions are good) between a single step of the focus motor, i.e. that say position 35.678 would be better than position 35.679 for example. The best method so far has been to get as good a focus as possible on the stars with a visible light luminosity filter, switch to the desired narrowband filter and compare by eye several shots at different focus settings. It does not take much to see that this could be (and has been on occasion) very time consuming – not what you want when nights are short. Because light at different wavelengths has a different focus point (the basic physical property behind chromatic aberration in a terrestrial photographic lens), each narrowband filter has a different focus setting. As a rough guide the H-alpha filter has consistently been approximately +10 more focus points than the average result of the luminosity filter and the S-II filter another +4. This has also been done with an uncollimated scope, where the difference across the frame in the focus point has been > +/- 100 focus points … A wonder that I was able to produce anything at all! 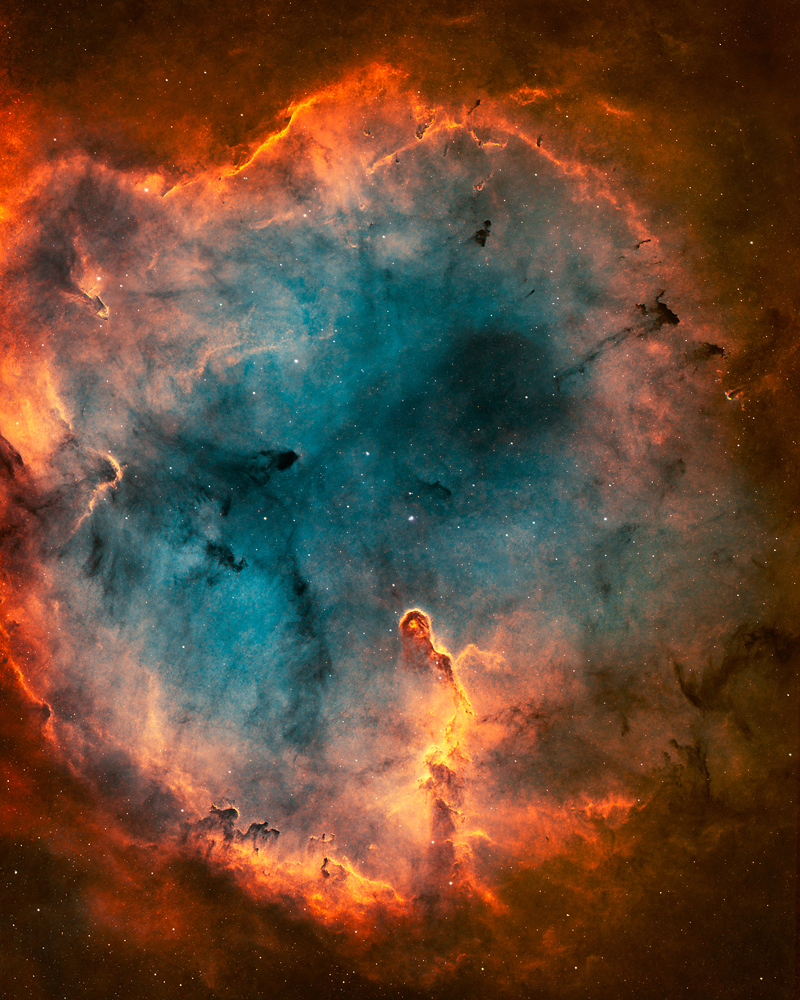 
It is an “interesting” experience to be hunting for the final focus position for a new filter, when you are aware that only 45 minutes remains before the first signs of the pre-dawn light will appear … 😉 Now that the scope has been collimated (30+ hours including my own method to best achieve this – see here) I will be able to work differently: Whilst per eye, I can get the stars in the centre of the image to within about +/- 30 focus points of the true focus position, in the very corners of the full frame sensor on the SIGMA fp (monochrome), the stars are considerably more sensitive and begin to distort very quickly once they are no longer in focus. Not just that, they distort along a different axis depending as to whether they are in front or behind the focus plane. As such, I can very quickly focus per eye here to within +/- 5 of the true focus position, and this is close enough to move on to finish focusing directly with the narrowband filters. The final aid here, is to not focus on the potentially faint target at hand, but rather to pre-focus with the brightest nebulosity available (perhaps Orion in winter / Eagle in Summer) before moving to the desired target. It is a good that I enjoy a challenge 😊 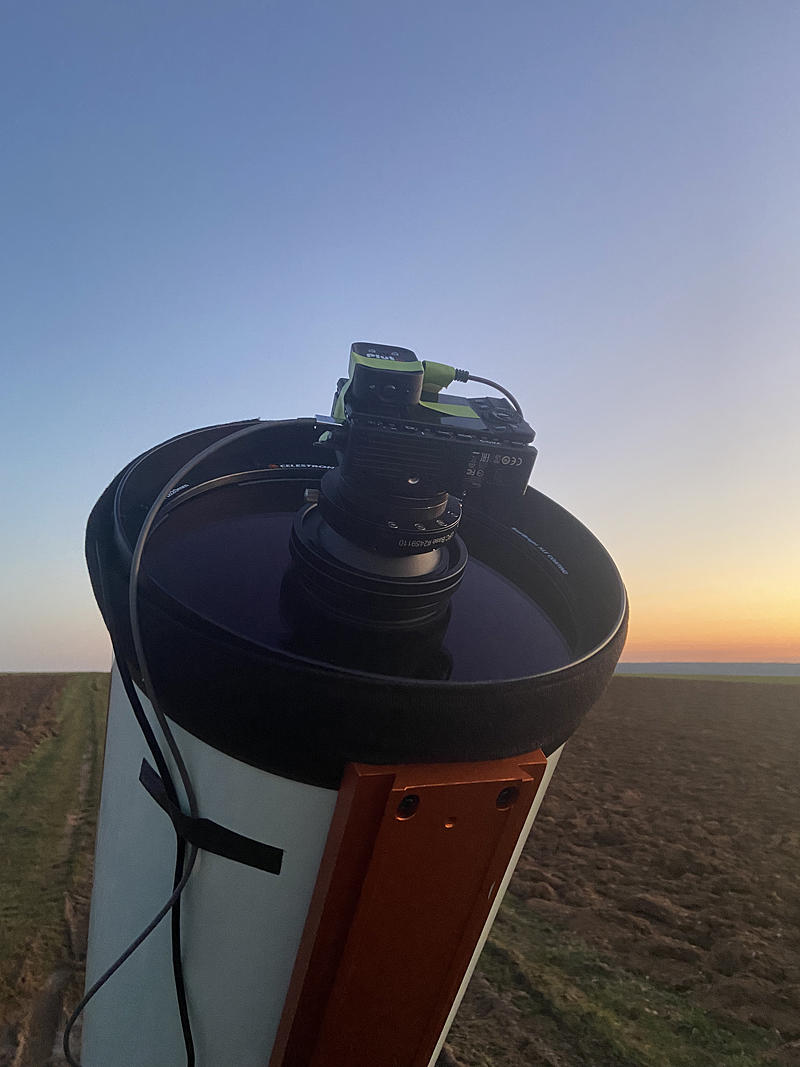 
Post processing: I always intended that I would work somewhat “unconventionally” with the data I would collect. Here, I really wanted to build on very many years of experience working with Adobe Photoshop. I am very pleased, that I have really been able to validate the assumptions I made as to why and how this should be possible. Of course, the first fundamental building block is that the camera has to deliver good data. Here, I have not been disappointed. The heatsink built into the camera to enable many hours of video shooting is just as effective with repeated long (5 minute) exposures during my astrophotography. I collect 3 types of data – a “Flat”, several “Dark” frames, and the “Lights” (the nebula data itself). The Flat I take about 1-2 hours before sunset (if there is no cloud) at around 60° inclination and in the opposite direction to the sun. This should be a uniformly exposed image, from which I will be able to correct vignetting in the Lights and be able to identify where any sensor spots may be present. The “Dark” frames, taken at the end of the evening by simply blocking the light entering the camera are used to generate a “Bad Pixel Map” and to identify any residual sensor noise not directly related to an image. They are not used to reduce the noise in the image data (= the “Lights”). A “Bad Pixel Map”, for example, is an image file that tries to capture as many of the hot (white) pixels as possible so that these can be removed from the “Lights”. All these modifications are made to the individual “Lights”, which are then registered (= aligned perfectly) in Astro Pixel Processor (Mac only) before being stacked in in Photoshop. The image data from each individual filter stack are then assigned to a colour channel or channels and these various colour channels are then blended to give a final (false colour) image. The choice of colour palette can have a dramatic effect on the final image and here considerable creativity can be brought to play. The Eagle Nebula (M16) is derived from the 3 filters: H-alpha, Sulphur-II and Photometric i’ (near-IR). By suitable choice of the colour channel(s) to which each filter has been assigned, considerable colour separation and thus a real 3D feel to the image can be achieved 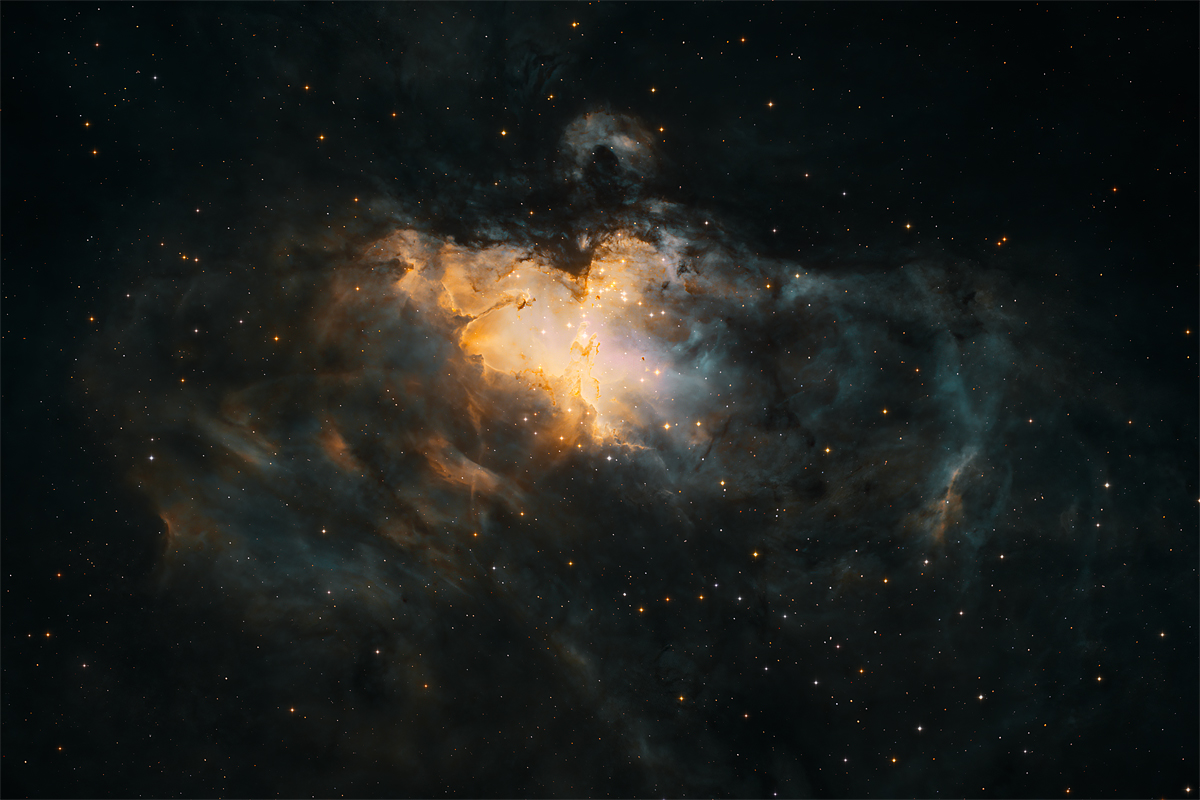 
I have learned a lot during the last few months and the idea of spending the next few nights under the clear skies of the next full moon somewhere in the middle of nowhere is as exciting as ever. I would like to think that on occasion I might not (have to) learn some new (hard) lesson, but every trip is new, so, who knows … 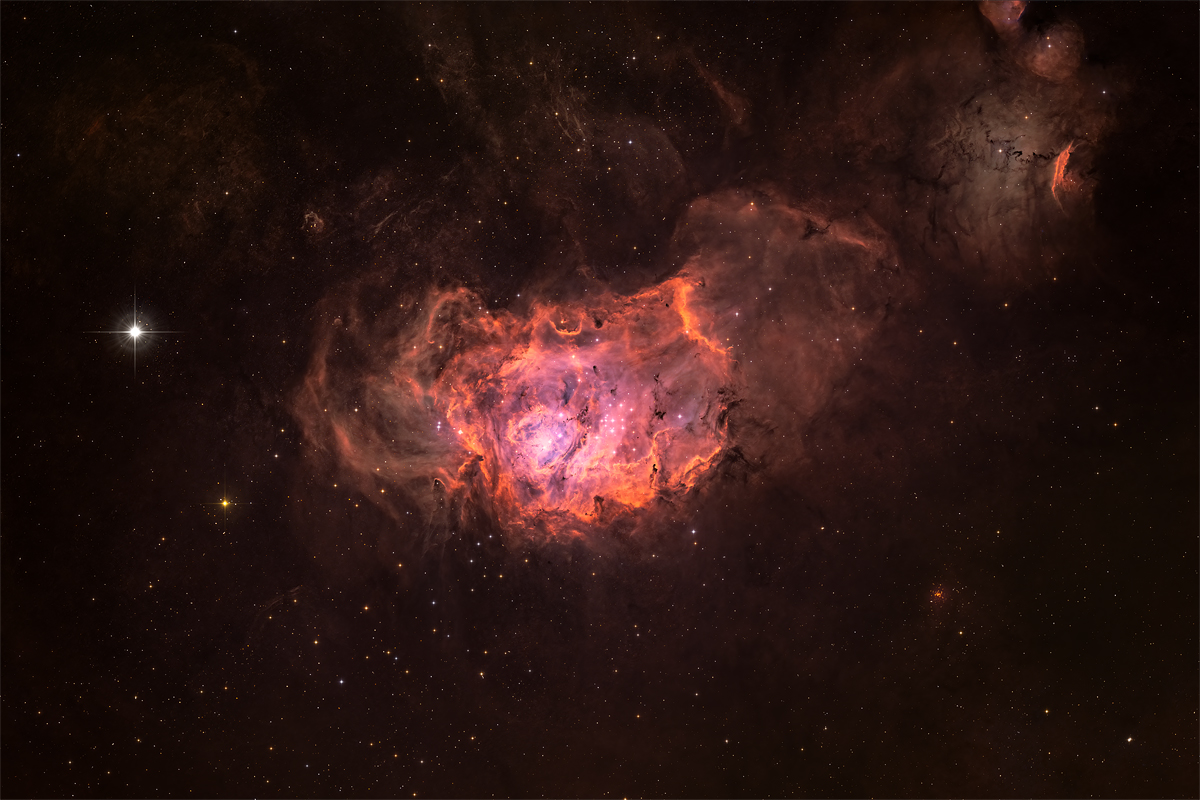 GALLERY OF ALL IMAGES TO DATE